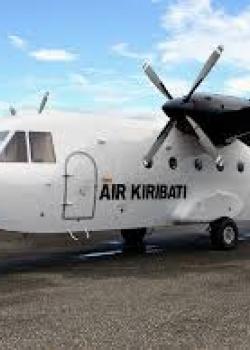 The International Air Transport Association (IATA) has provided Kiribati’s national airline, Air Kiribati, with its official two-letter designate code – IK and its airline code of 069.
A statement from Air Kiribati said the letter and numbers codes will be used by the airline for its international flights. In addition, it provides the airline with the ability to codeshare with other airlines.
Air Kiribati has signed an agreement with Solomon Airlines who will partner with AKL to establish new aviation services that will link Tarawa with Honiara, Brisbane and Nadi which re-launches Air Kiribati as an international airline.
In a recent press conference, Kiribati President Taneti Maamau said the Kiribati government’s new Dash 8 commercial aircraft is expected to arrive in the country in June or July this year to provide services to Funafuti, Tuvalu and Majuro, Marshall Islands and other nearby countries.
He said Air Kiribati’s new airbus aircraft which is being procured by the Taiwan government is expected to arrive in the country in November this year to continue a broader international flight services for Kiribati.
(Source: Air Kiribati 02 April 2017)
Translate Page »