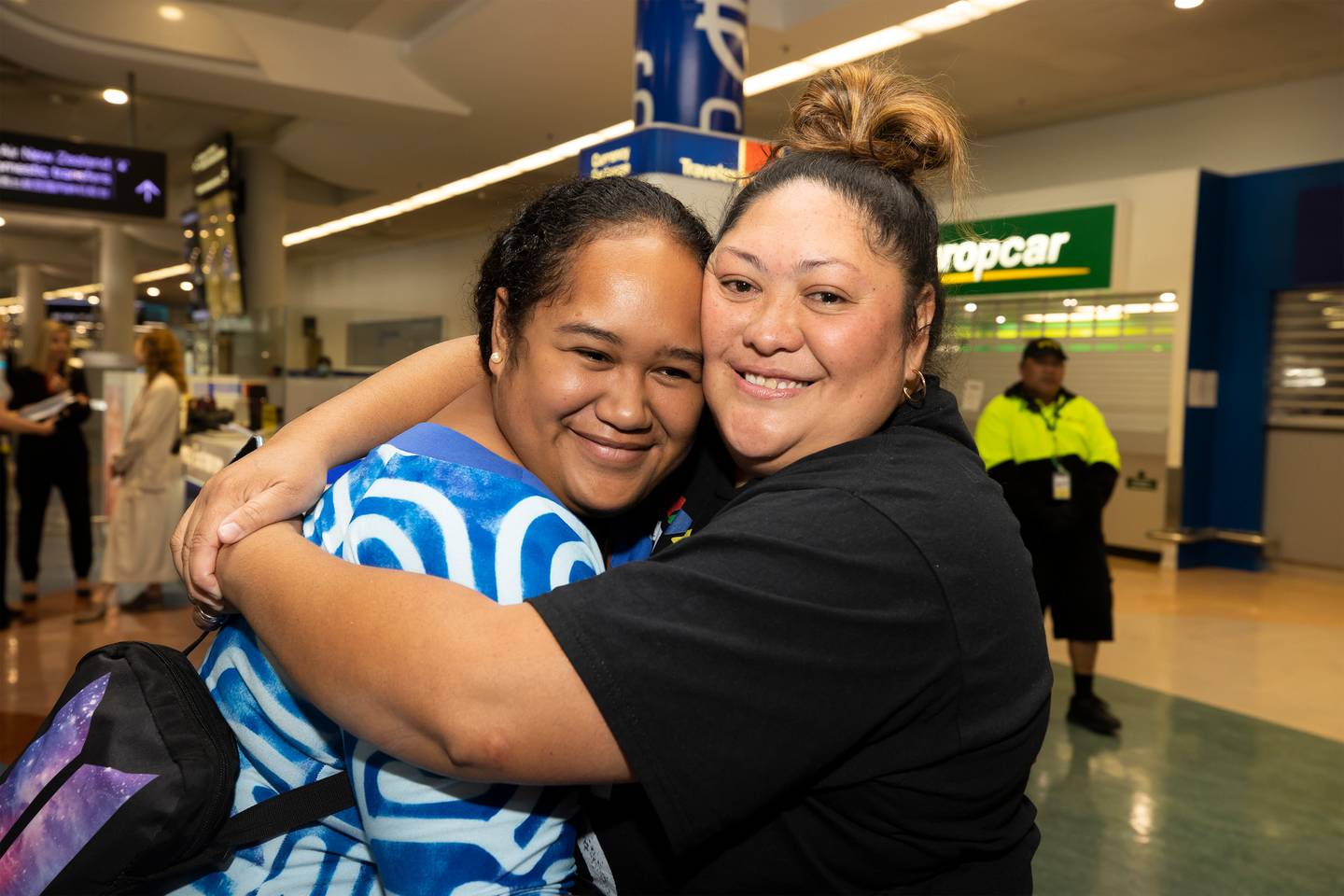 Straight through the Auckland International Airport on the first quarantine-free flight from the Cook Islands she got to meet the baby for the first time.

Cabral was also reunited with her other granddaughter Mahina who she had not seen for more than a year and in Auckland Airport’s arrivals area she wasn’t about to let either of them go as tearful daughters Penelope and Ariadne looked on.

She had been in New Zealand early last year on a grandparent visa, had returned to the Cook Islands on March 19 last year, just before borders closed.

She was stranded there for 10 months without seeing her daughters. Along with many others among the planeload of around 100 passengers, the obstacle of 14 days in managed isolation proved too much until now.

“We tried so much to get her back over the last few months and we are absolutely stoked the borders opened,” said daughter Penelope Franca.

Leanni Kairua and her husband were in a hurry to get away – their daughter Veronica was in labour at Waitakere Hospital. She had left the Cooks as the pandemic struck.

“This is amazing, the timing of this flight couldn’t have been better,” she said.

“But we have to get going right now.”

Rimu Iaone was excited about meeting his granddaughter Nana – their first reunion in over a year.

“We jumped for joy when we heard about the fight. We thought it was going to be March but they brought it forward,” Iaone told the Herald.

Nana, 16, will spend two weeks in New Zealand before returning to the Cook Islands to go to school.

Her aunty Nancy Rimoni wiped away tears and said she was grateful to the governments of the Cooks and New Zealand for working out the arrangement.

Another man who arrived was going to a funeral while another couple was going to long-delayed medical appointments.

April last year was the last time passengers were able to walk straight through the airport to loved ones rather than on to buses and into managed isolation hotels or quarantine facilities.

So far more than 100,000 returning New Zealanders have passed through the facilities and today’s flight is a small but significant step in normalising travel between New Zealand and, in the first instance, the Pacific Islands.

The airline’s chief executive, Greg Foran, said he was pleased with how bookings have been tracking and what this flight means for more travel between New Zealand and neighbouring nations.

“We have been encouraged by an increase in bookings following the announcement, especially for January and February.

“We knew there was pent up demand from Cook Islanders waiting to come to New Zealand without quarantining. We’re thrilled to bring the first wave of Cook Islanders who meet the quarantine-free requirements into New Zealand. We see this as a really positive step towards a two-way airbridge with Rarotonga.”

The health checks for quarantine-free travel from Rarotonga to New Zealand will occur both at the airport in Rarotonga and in Auckland Airport on arrival.

Passengers from the flight will use a streamlined Safe Travel Path, which separates them from passengers arriving from other parts of the world.

“Air travel is important for trade, business or just heading off on an exciting adventure – and also for connecting friends and whanau for life’s precious moments is what really makes it special,” said Auckland Airport’s manager of aeronautical commercial Scott Tasker.

While Auckland Airport has prepared to separate its international terminal into two self-contained zones – a health management zone for arrivals needing to go into managed isolation and quarantine, and a safe travel zone for arrivals from countries with which New Zealand has formed two-way, safe travel bubbles – these separated zones won’t operate for the Cook Islands arrivals.

“The expectation of only two flights per week under the one-way, quarantine-free arrangement with the Cook Islands made a Safe Travel Path a practical interim step, following discussions with border agencies and government officials,” said Tasker.

Air New Zealand will operate flights from Rarotonga on Wednesdays and Saturdays using an A321 aircraft.

Tasker said allowing quarantine-free flights from a Covid-free country like the Cook Islands is a small, but important, first step in the recovery of the aviation and tourism sector.

“Taking a careful and staged, risk-based approach to re-opening the New Zealand border will be crucial in re-establishing regular, reliable air links with the Pacific Islands and beyond.”

International passenger movements have been devastated by the pandemic.

“We are a long way from the 15,000 people that would have walked through our international arrivals doors daily this time last year, but what we’ve seen with domestic air travel is that people are keen to fly again when lockdown restrictions are lifted. We now have domestic travel volumes at around 60 per cent of what they were pre-Covid.”

Before the pandemic about 1.4 million people travelled to and from the Pacific Islands through Auckland Airport each year on eight different airlines.

Tasker said it would “take some time” to get those air connections re-established.

Before returning to the Cook Islands passengers will need to undertake a Covid-19 test within 96 hours of their flight departing. The result must be negative. Travellers also must complete the exit health clearance process at Auckland Airport.

New Zealanders can’t yet travel to the Cook Islands for holidays. Entry is limited to Cook Islanders and current holders of Cook Islands work and residence permits who meet that country’s health entry requirements.

Work is under way on establishing a two-way travel bubble with Australia which could start as early as the end of March. New Zealanders can travel quarantine-free to New South Wales, the Australian Capital Territory, the Northern Territory, Queensland and Victoria but coming in to this country they must complete 14 days in managed isolation or quarantine.