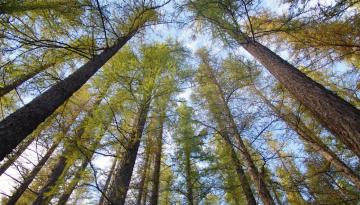 When the results of his latest research into carbon emissions came in, Louis Schipper sat back in his chair and just stared.

“Oh,” the professor of biogeochemistry at the University of Waikato said to himself, expletives running through his head. “We have a problem.'”

While that might not be news to anyone who’s been keeping an eye on climate change the past couple of decades, Dr Schipper fears we have far less time to find a fix than anyone realises.

“What we found is that the ecosystems of the world look like they’re going to stop absorbing as much carbon dioxide as they have in the past,” he told Newshub.

“In the past, all of our forests and grass have taken up carbon dioxide, offsetting some of the emissions that we have made into the atmosphere. That’s been of great benefit for us – it’s bought us some time.

“But what we have observed from this data is that the amount of carbon dioxide that’s going to be taken up by these ecosystems is going to decline. We’re going to have less time than perhaps we thought to reduce emissions into the atmosphere.”

His study, published in journal Science Advances on Thursday, says sometime in the next 20 to 30 years the world’s plants will likely start releasing more carbon dioxide into the atmosphere than they can absorb.

Dr Schipper, with colleagues at the University of Waikato and Northern Arizona University, analysed 20 years of data taken from 100 sites around the world in different environments, including Paeroa, to see “how sensitive the major processes involved in carbon exchange are to changing temperature”.

“The key finding that all of this work has led to is that photosynthesis seems to maximise at about 18C for most plants, whereas respiration carries on upwards as temperature increases,” said Dr Schipper.

“What that means is anytime you’re above 18C you’re getting less photosynthesis than before and more respiration – that means you’re spending more than you’re earning and your savings are going to go down.”

The world has been warming like never before since the 1800s, thanks to the release of greenhouse gases into the atmosphere. The rate of temperature increase has sped up in the past couple of decades, with many scientists fearing feedback loops are starting to kick in – for example, warming has left less of the Earth’s surface covered in ice, meaning less of the sun’s energy is reflected back into space, resulting in even more warming.

A separate study published in December suggested it’s almost certain we’ll cross the threshold for a “dangerous” level of global warming as soon as 2038.

Last year was the equal-hottest on record, tied with 2016 – more than 1C warmer than the long-term average. A higher average means more volatility in day-to-day temperatures, with more time spent above that 18C mark.

The world’s plants currently absorb about a third of the carbon we humans put into the atmosphere.

“We think – or the data suggests – that we’re going to see a 50 percent decline in the amount of carbon dioxide that is being taken out of the atmosphere by plant systems, mid-century,” said Dr Schipper. “That is a rather shocking result… These are not the sort of results that you hope for.”

Others on Dr Schipper’s team felt the same.

“When we saw this, I thought, ‘I can’t drive a car anymore,'” said University of Waikato biochemist Vic Arcus. ” I sold my car and bought an electric bike. That was my response to these data.”

It’s not clear why plants’ photosynthesis winds down as temperatures surpass 18C, the scientists say, and they’re continuing to refine their theory to make it more robust.