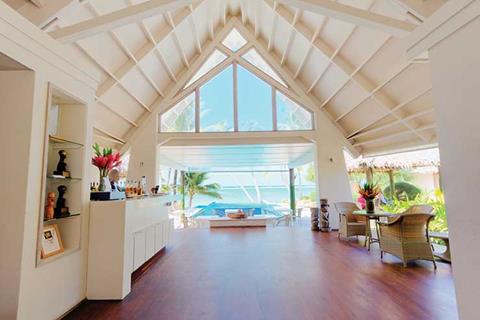 The Coolest Rooms In The South Pacific For 2017

The latest developments in the South Pacific offer your clients even more choice when it comes to a luxurious place to lay their heads. From the Conrad Bora Bora Nui with its newly refurbished villas to traditional bungalows at the Cook Islands’ Little Polynesian Resort, there’s a range of new and recently renovated options for clients looking to make the journey to these beautiful islands. We highlight some of the top properties to have on your radar this year. The Conrad Bora Bora Nui, Tahiti While Bora Bora is famed for its overwater villas, for the ultimate bragging rights suggest the archipelago’s only two-storey overwater accommodation, complete with a sauna, bar area and whirlpool.
The presidential villas can be found at the Conrad Bora Bora Nui, which opened in April in a private cove on Motu To’opua, just a short boat ride away from Bora Bora’s coast. Following a huge refurbishment, the former Hilton property features 114 light and airy villas and bungalows, with the presidential villas offering two bedrooms and three bathrooms.
The Conrad comes recommended by Gold Medal’s Asia and Australia senior product manager, Rebecca Turner, who explains: “The presidential villas have hosted some of Hollywood’s most famous faces and the hotel boasts three restaurants, three bars, an infinity pool, mini-golf and a private island known as Motu Tapu, which is only accessible by boat.”
Book it: Gold Medal has seven nights’ B&B at the Conrad Bora Bora Nui, two nights’ room only at the Intercontinental Tahiti Resort & Spa, flights and transfers from £4,459pp, departing on November 1 or 30, 2017.

Since opening in Waigani – the commercial heart of Port Moresby – in June 2016, the Stanley Hotel and Suites has tended to attract business clientele. However, it is now targeting leisure travellers with the introduction of a spa, and by highlighting its attachment to the Vision City Mega Mall, which is home to a nightclub, cinema and restaurants.
There are 429 rooms, but book the presidential suite for views of the Stanley Mountain ranges and National Stadium. The 20th floor suite sleeps four and offers 340sqm of space, packed with a large dining room, a full kitchen and marble bathroom with a monsoon shower and oversized Jacuzzi bath.
Book it: In August rooms cost from £182 per night.
Little Polynesian Resort, Cook Islands

After its rooms were refurbished in October, Rarotonga’s Little Polynesian Resort received a further boost in January when it joined Small Luxury Hotels of the World (SLH).
SLH vice president of sales EMEA, Carsten Lima, rates the resort’s location on the shores of Titikaveka Beach as “one of the most beautiful beaches in Rarotonga”.
He adds: “It’s perfect for clients who like watersports such as stand-up paddleboarding, kayaking and canoeing, which are offered to guests free of charge. The hotel is ideal for clients who want a tranquil or romantic getaway as it ensures absolute privacy and has a no-child policy.”
He recommends booking one of the 10 traditional bungalows, known as ares. Guests can overlook the lagoon from their king-sized bed under towering vaulted ceilings before stepping into a private walled courtyard to enjoy an outdoor shower.
Book it: Prices start at £605 per are per night, on a B&B basis.
The Fiji Marriott Resort Momi Bay, Fiji

Travel 2’s Oceania assistant product manager, Rachel McMurdo, has a top tip for those seeking the latest in Fijian luxury: “The hottest property in Fiji at the moment is the Fiji Marriott Resort Momi Bay, a new five-star hotel on the mainland with a beach lagoon in the centre of the resort. It features overwater villas and suites which are the first of their kind in Viti Levu – the largest island in Fiji.”
The property opened in April and offers 136 deluxe rooms and 114 bure villas, all with a private balcony or terrace overlooking the pool, ocean or lagoon.
Book it: Travel 2 offers three nights’ B&B at the Fiji Marriott Resort Momi Bay in a deluxe lagoon view room and six nights’ room-only in a beachfront bure at the Tokoriki Island Resort from £2,439pp. Includes flights and transfers, departing June 5 and June 24, 2017.

For small groups or families, suggest one of the 25 two or three-bedroom waterfront villas at the Taumeasina Island Resort. When it opened last July, it became Samoa’s only island resort, situated just outside Apia and linked to the mainland by a causeway. The villas are surrounded by tropical greenery, with private balconies overlooking the lagoon and Upolu mountains. There are also 80 oceanview rooms.
The Samoa Tourism Authority’s chief executive, Sonja Hunter, describes the resort as “absolutely stunning”, adding: “The design has been sensitive to the environment and reflects the Samoan culture in details throughout the property.”
In the centre of Apia, Aggie Grey’s Hotel reopened in August as the Sheraton Samoa Aggie Grey’s Hotel and Bungalows. The property has retained much of its colonial style but the 175 rooms, suites and bungalows have all been renovated.
Book it: Prices at the Taumeasina Island Resort start at £130 for an oceanview room on a B&B basis during the low season (October 1, 2017 to March 31, 2018).