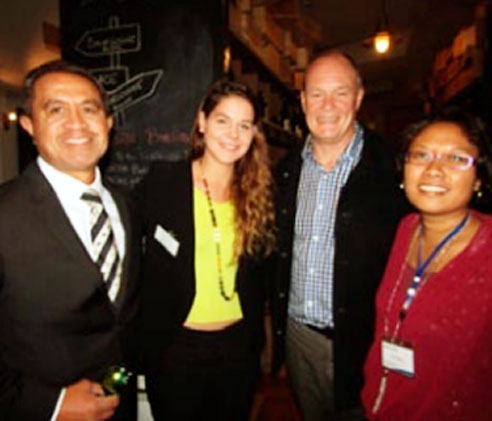 Caledonia Tourism hosted key players on the business tourism side of the trade to lunch at Maison Vauron, Auckland on Friday and promoted both the ‘France in the Pacific’ appeal of Noumea and the various attractions beyond the city.
Incentive travel practitioner Moni Collins, managing director of MTC Concepts, gave a brief presentation during the lunch and says he has recently taken an initially reluctant group to the destination.
‘New Caledonia was not the first choice and a lot of people in the group didn’t understand the destination,’ says Collins.

Photo: Marieke Mendez, Marriott; Stacey Butcher, Orbit World Travel; Tanya Stranks, World Travellers; Suzanne Kenyon, New Caledonia Events
‘That’s a challenge, but it’s one to overcome. When the group got back, people were saying it was the best trip ever. So if you haven’t taken a group or done a programme in New Caledonia, give it a go.’
Sally Pepermans, New Zealand representative of Tourism  New Caledonia says the destination has had a massive year in the corporate groups area and the aim is to keep the momentum going.

She says both corporate and leisure groups can discover more than they realise – from French Cowboys in the New Caledonian outback, to seeing whales in the lagoon, taking a trip to Isle of Pines, and exploring the Melanesian culture – particularly of the Kanak people on the east coast.