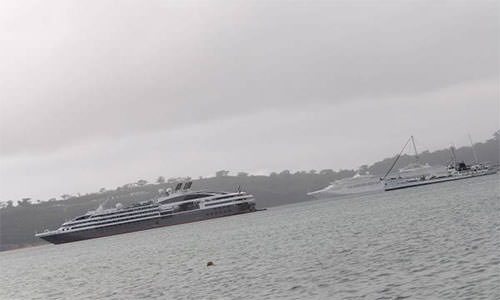 Two cruise liners arrived in Port Vila Harbour Thursday 29 Dec 2016,  and with not enough space at the wharf, one of them flying a French flag had to anchor in the harbour.
With New Year at the door, drivers of buses and taxis have every reason to smile.
Air Vanuatu domestic flights to all destinations around the country have been busy over the Christmas period, as the season culminate with school holidays that sees students returning to home islands for Christmas and New Year recess, according to Tiffany Carroll, of Air Vanuatu.
Flights were also busy with freight that included parcels sent to families to different destinations throughout the country for Christmas and New Year festivities.
The national airline has also been very busy throughout the festive season with its international flights flying in holiday makers into Port Vila and Vanuatu, who chose Vanuatu to celebrate Christmas and New Year festivities away from home.

According to Air Vanuatu’s Tiffany Carroll, Air Vanuatu will continue to be busy with both domestic and international flights well into January 2017.
The Daily Post also understands that local inter-island vessels have been very busy over the Christmas and also with the New Year festivities transporting passengers as well as cargo and freights to and from the islands throughout the country.