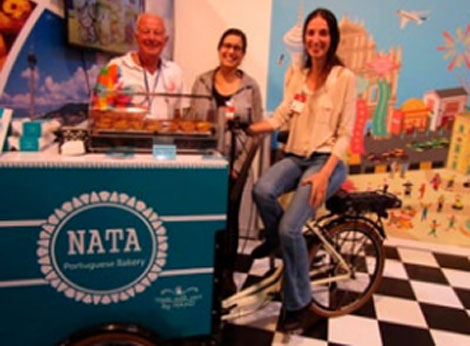 Foodie travel has found its place over the past couple of years, but there is more growth to come, according to a small but diverse group of tourist offices and tour companies at The Auckland Food Show this week.
Intrepid is showing off its Food Worldwide Adventures brochure and hosting a competition for show visitors to win a trip up to the value of $3000.
Intrepid assistant manager Charlotte Randell says the company’s food tours are a big hit and the range on offer has steadily grown. New food adventure destinations include South Korea and Israel.
‘They have everything our normal trips offer but they have an extra food element – cooking classes, local restaurants, street food crawls, beverage tastings etc. The brochure has both real food adventures, eight to 15 days, and bite size breaks, two to four days.’
Sally Pepermans, New Zealand representative with New Caledonia Tourism, says the destination has a high profile at the Auckland Food Show because more and more Kiwi consumers were clearly travelling for a food experience. New Caledonia is offering a significant door prize (see TRAVELinc Memo 25 July) and has food supply companies on its stand.
New Caledonia Goes Big At Food Show
New Caledonia will have a high profile at the Auckland Food Show this weekend, including offering a big prize that consumers go into a draw to win if they purchase their tickets online.
The prize includes two return tickets from Auckland to Noumea courtesy of Aircalin and New Caledonia
Tourism, airport and hotel transfers with Arc En Ciel Service, three nights accommodation at the Sheraton New Caledonia Deva Spa and Golf Resort, four nights at Le Lagoon hotel, a diving experience for two with Abyss Diving Centre, an Amadee Island day trip for two, two hours of private French tuition and a guided visit of Noumea city market courtesy of CREIPAC.
A New Caledonia chef, Nicolas Bourgois, will be showcasing his skills at the cooking theatre and New Caledonia Tourism will be exhibiting along with a number of partners.
The Food Show is being held at ASB Showground, 27 to 30 July. www.foodshow.co.nz
New Caledonia Voyages, Aircalin, and New Caledonia Tourism are promoting a gourmet food package at the event and it was getting a steady pick up during the show’s preview day yesterday.
Pepermans says that the travel trade is starting to recognise the importance of food tourism and increasingly asking about restaurants and shops to buy tasty produce.
‘Being at the food show makes sense for us because gastronomy is a big angle this year. We are promoting cheeses, wine, salami, chocolate, croissants and baguettes and fine food in general.
The Macao stand was giving away Macanese / Portuguese tarts and promoting its cuisine.
‘It is the first time we have been at the food show,’ says Richard Froggatt, ofthe Macao Government Tourism Office New Zealand.
He says the word to consumers is that Macao offers European food with an Asian flavour and it’s a message the trade is picking up on as well. ‘I think the trade is recognising the attributes of food tourism and how it applies to a destination like Macao.’
The Philippines was also at the show, with a number of competitions and guest appearances.