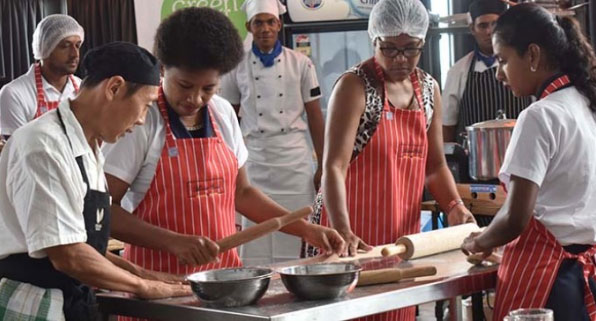 American & Europe get a glimpse of Solomon Islands

Americans, Germans and other European nationals, and Caribbean tourists set foot in Honiara for the first time when cruise liner Crystal Serenity docked at Pt Cruz on Friday  morning.

Yesterday’s heavy downpour did not dampen the visitors’ spirits as they explored the sites around Honiara and scouted out the various souvenirs on sale.

Five Brazilian tourists arrive in Honiara on board the Crystal Serenity

Many also share that the arts and craft found here are unique and very different from ones they have across other countries during their voyage.

The artefacts on display yesterday ranged from wooden carvings, necklaces, bracelets and cloths designed in traditional ways to woven baskets.

Tourists accompanying the Destination Solomons were also impressed to see the WWII sites, country’s cultural artefacts and histories including the city tours. Few hit the jackpot in their snorkeling tour.

According to Solomon Islands Visitors Bureau, most visitors on the Crystal Serenity are in their fifties.

He said many were eager to learn of the Solomon Islands’ history and culture.

The tourists share that before they came, they had brief knowledge of the Solomon Islands as being the islands ‘adrift in time’, being a tropical paradise with tropical rainforests and rugged mountains and hills, and host to some of the bloodiest sites of the World War II.

The ship’s tourists are expected to be shown around the islands and islets surrounding Gizo, where they will experience the beauty of Western province’s environment, history and culture.

Crystal Serenity will stop over for eight hours before moving on to its next destination.

“We will close the section of road that begins here at the MSG building to the BSP building today.

“This would only allow for pedestrians and local carvers to showcase their traditional along the main road.

“Entertainments and will be held at the old Gizo market area and a brief welcome ceremony will be stage here in front of the Gizo hotel upon the landing of the first tender boat.”

Lilo said a traditional war canoe (Tomoko) will escort the first tender to the shores at 8am to be greeted by warriors.

Other sites for the tourists to visit include, Saeragi Village, Oravae Cottage and other tourism resorts within Gizo Island.