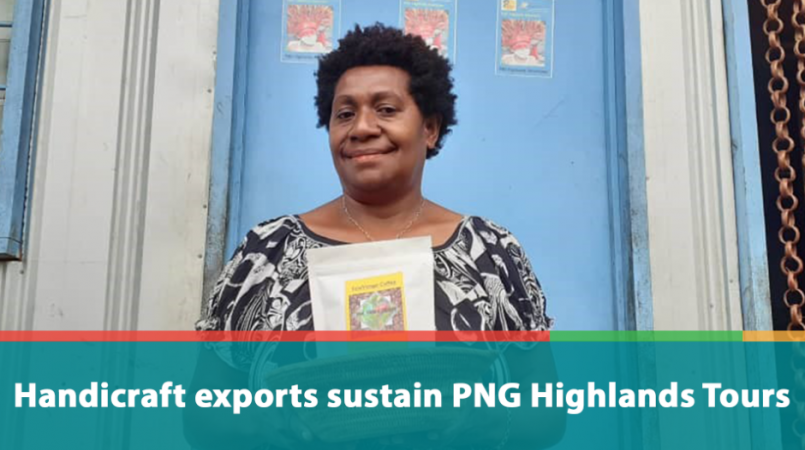 Jenny Gonapa had no office when she started her business in 2009 – just a laptop, an idea and her determination.

Today, PNG Highlands Tours is regarded as a reliable tourism operator, an achievement obtained through Jenny’s commitment to learning and hard work.

In many ways, her journey as an entrepreneur started back in 2001 when she was selected to undertake an Australian Government supported scholarship – a business management diploma she completed through TAFE Queensland.

After she graduated and returned home, Jenny worked with a tour operator in Goroka, but in the back of her mind was the desire to run her own business.

With the encouragement of her brother, who also worked for a tour operator, she started PNG Highlands Tours.

The first few years were tough – as is the case with many start-ups – but Jenny and her husband were committed.

They invested thousands of Kina to attend overseas travel expos, promoting the business and hoping to attract tourists.

“I participated in a lot of travel shows like our very own Lukim PNG Nau Expo, the South Pacific Tourism Exchange in Auckland, the Birding Fair in London and even the world’s leading travel show – ITB in Berlin,” Jenny said.

“It was costing me and my husband so much time, effort and money, and I had not gotten one tourist to take an interest in coming on my tours.
We were sacrificing a lot just for me to attend these expos, and every time I went, I came back without any booking.”

With prospects looking bleak, Jenny was about to give up when she got a call from a friend.

“Alice Kuaniningi, the then marketing manager for the PNG Tourism Authority, was assisting me and other tour operators with attending expos and roadshows,” Jenny continued.

She told me, ‘You mustn’t give up. You’re dealing with humans, not cargo that will be brought in on ships. Be patient!’”

Sure enough, the first group of tourists signed up for packages in 2012. They were American and European retirees – a demographic that has remained a key market.

Tourists bought full packages, which featured trekking, cultural festivals, bird viewing, diving, village stays, road transfers and hotel reservations.
With the business growing steadily, Jenny invested in land in Goroka where she built an office and diversified into other operations, including a bottle shop, food bar and grocery store.

They use digital platforms and clients can book online through their website, Facebook, Instagram or LinkedIn, or through travel agents in the USA, Europe, Japan, North America, Australia and New Zealand.

“I learnt a lot from my sisters from Australia when they came up last year,” Jenny said.

“I can say that this was the best network and exchange program to have been part of.”

Jenny opened an office in Cairns, was planning to open new offices in Sydney and Canberra, and was working with agents around the world to increase bookings before things were disrupted by COVID-19.

Flights stopped, tours were cancelled and business ground to a halt.
“Our income is mainly tourists travelling into the country, and when the borders are closed we are shut down completely,” Jenny said.

To assist small and medium enterprises to survive the pandemic and adapt to challenging conditions, the Australian Government supported PNG Highlands Tours and other Laikim Sister entrepreneurs by providing business coaching and mentoring.

They have been taking part in Zoom video sessions and working through strategies to pivot their businesses and cope with the personal stress.
For Jenny, the connections built through Laikim Sister proved useful as she adapted her business to export handicrafts and cultural items.

“I built my network of handicrafts business from here and have been exporting to keep my business going,” she said.

“I have done five exports so far and am preparing to send more in the coming weeks.”

Times are challenging, but Jenny has the mindset of an innovator.
She’s focused on the opportunities and keeps moving forward.