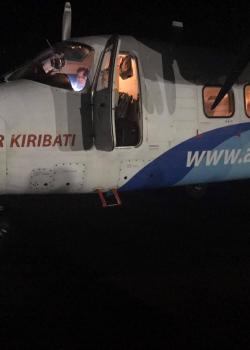 Kiribati national airline Air Kiribati has successfully conducted its maiden night flight at the Bonriki International Airport following the installation of the runway’s lighting system this week.
The maiden night flight test, conducted Wednesday night at the Bonriki airport was witnessed by President Taneti Maamau, Minister of Information, Communications, Transport and Tourism Development Willie Tokataake and his Secretary Dr Teatao Tira and other senior government officials.
At today’s press conference, President Maamau says Air Kiribati aircraft can now for the first time, conduct early morning flights to the outer islands as well as returning flights from the outer islands to Tarawa at night.
The provision of lighting system to the runway and conducting night flights at the Bonriki International Airport on Tarawa is a requirement from the International Civil Aviation Organisation ICAO) which the Kiribati Government must comply with before it can commence international flight services using its  Dash 8 and Airbus aircrafts.
Maamau says the Dash 8 is expected to arrive in the country in July while the airbus towards the end of this year.
The Dash 8 aircraft can conduct domestic flight services but restricted to only four outer islands whose runways are long enough for the aircraft’s landing purposes namely Butaritari, Abemama, Tabiteuea North and Nikunau.
President Taneti Maamau says the new Dash 8 could also provide international flight services to the neighboring countries of Tuvalu, the Marshall Islands and other Pacific island countries.