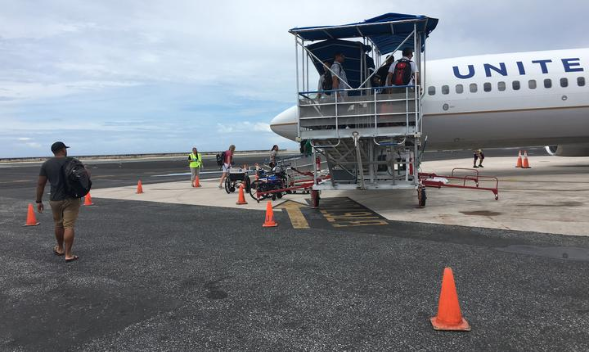 In the wake of skyrocketing coronavirus infections in Hawai’i and Guam, and government-mandated “lockdowns” in both islands to contain Covid-19 spread, the Marshall Islands government has suspended non-essential outbound air travel.

Guam and Hawai’i are the two primary destinations for Marshall Islands travellers.

Hawai’i reported 305 new cases Friday and Guam 112 as governments in both locations issued stay at home orders and closed businesses, parks and beaches to limit the spike in cases since the beginning of August.

Details were being worked out by the National Disaster Committee to implement the new travel suspension.

Inbound travel had been suspended since 8 March, although the country exempted islanders returning from Covid-free islands in the Federated States of Micronesia and was allowing essential US Army workers into the Kwajalein missile range under a 21-day quarantine system with multiple Covid tests prior to their release.

Leaders in the Marshall Islands, which remained one of the few Covid-free nations in the world, had become increasingly concerned by the number of infections among non-Hawaiian Pacific islanders – which includes Marshallese – in Hawai’i who now account for 31 percent of all coronavirus cases in the state, but are only four percent of the population there.

They were the hardest hit of all groups in the state, with an infection rate 10 times the average for other races, according to Hawai’i Health Department statistics.

Last week, over 100 Marshall Islanders from Ebeye and Majuro boarded the one United Airlines flight of the month to Honolulu despite the increasing number of cases in Hawai’i.

The Chief Secretary’s office said on Friday the National Disaster Committee, which it oversees, had been instructed by Cabinet to develop criteria only for essential departures such as medical emergencies.

The next international flight to Hawaii and Guam is scheduled for mid-September.

“The government of the Marshall Islands advises its citizens that this suspension is temporary, as the NDC continues to monitor the global health situation, particularly in Guam, Hawaii and the continental US,” said a statement from the Chief Secretary’s office.

The government is preparing to extend the ongoing ban on inbound travel for at least another 30 days before the current order expires 5 September.