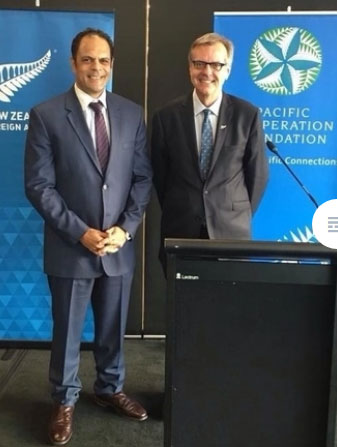 Peter Lund has made a strong contribution to the Pacific Trade and Economic issues at the Auckland Office of the New Zealand Ministry of Foreign Affairs and Trade (MFAT).  After nearly three years he’s moving to the North Asia Division of MFAT in Wellington, working on New Zealand’s relations with Japan.Pacific issues however will continue to feature as Japan is an active participant in the region with political, economic and development interests.  Japan is also hosting the Rugby World Cup in 2019 which is an important platform for New Zealand, Fiji, Samoa and Tonga Mr Lund said.
Prior to his Auckland stint, Mr Lund spent four and a half years based in Suva at the New Zealand High Commission as deputy Head of Mission.  Over the course of his career he also worked in Papua New Guinea and Korea and in the Economic and North Asia Divisions in Wellington.
Mr Lund reflected on his time with the Auckland office.
“MFAT’s presence in Auckland has expanded during my time here, reflecting the importance of the city as New Zealand’s business capital and centre for engagement with the Pacific. MFAT recognises that it needs to be well connected in Auckland,” said Mr Lund.
“Being part of a pioneering MFAT team in Auckland, building linkages and collaboration with a wide range of stakeholders engaged in the Pacific has been memorable and rewarding.  Pacific Trade and Invest has been an important partner,” he said.
“It’s been a most enjoyable and rewarding three years here in Auckland.  I’m especially pleased to have been part of cohesive and effective Pacific Inc group of Auckland-based organisations working with a common purpose.
It was also particularly pleasing to see the development of the Pacific Chairs group as a vehicle for coordination and cooperation amongst business councils and agencies active in the Pacific Islands.
“New Zealand sees itself as a Pacific nation and a prosperous and successful Pacific is vital for New Zealand and its neighbours in the region.  As a result, New Zealand’s international development assistance continues to be focussed on the Pacific and we’ve sought to target sectors where New Zealand has expertise and can make a difference, in partnership with governments in the region” Mr Lund said.
Strong connections were also evident at the political level, as seen with this year’s Prime ministerial-led mission to Niue, the Cook Islands and Tonga.
The diversity of the Pacific Islands makes for fascinating work.  Having worked in Fiji, he said it was great to see trade and economic linkages between New Zealand and Fiji continuing to expand.  But positive things are happening with smaller economies as well.  A good example was New Zealand inputs into tourism in Niue delivering strong results.
Labour mobility was a vital issue for many Pacific Island countries and a major earner of foreign exchange.  The Recognised Seasonal Employer (RSE) scheme has continued to expand – with employers building long term linkages with workers from the region that flow back to communities.  Other labour mobility schemes were evolving and taking part in the inaugural Pacific Labour Mobility Conference in Christchurch in 2016 provided a lot of insight.
The conclusion of the PACER Plus negotiations and a comprehensive implementation programme was an important development for the region. Peter was pleased to see increased engagement of the French Pacific territories (now full members of the Pacific Islands Forum) with the wider Pacific, with regular visits by heads of government, ministers and businesspeople from New Caledonia and French Polynesia to Auckland.
But the Pacific remains vulnerable to the impact of natural disasters, as seen with Cyclone Pam in Vanuatu in 2015 and Cyclone Winston in Fiji in 2016.  “New Zealand’s strong response to the cyclones, both in immediate disaster response and long-term rebuilding, in partnership with host governments, was inspiring,” he said.
The highlights included working with Matua Shane Jones. “It was a real privilege to work closely with Matua Shane Jones in his role as ambassador for Pacific economic development and focus on the key sectors of fisheries, agriculture, horticulture and tourism – vital and sustainable industries for the countries of the region, “he said.
Helping out in Port Moresby in the lead up to and during the Pacific Islands Forum in 2015 although busy was also memorable. “It was interesting to observe the many changes on the ground since I concluded my posting there in 2007.” Another highlight was seeing the annual Auckland programme for returning Pacific Heads of Mission grow and develop over three years. It was really encouraging – a record turnout of 150 at this year’s business breakfast illustrates the important linkages that our posts in the region have with the business community.
“I’m delighted to see MFAT continuing to have an active Pacific-focused presence in Auckland, with Georgina Roberts (our high commissioner in Vanuatu) heading a new Pacific team from 2018,” he concluded.
PTI NZ wishes Mr Lund all the very best in his new posting.