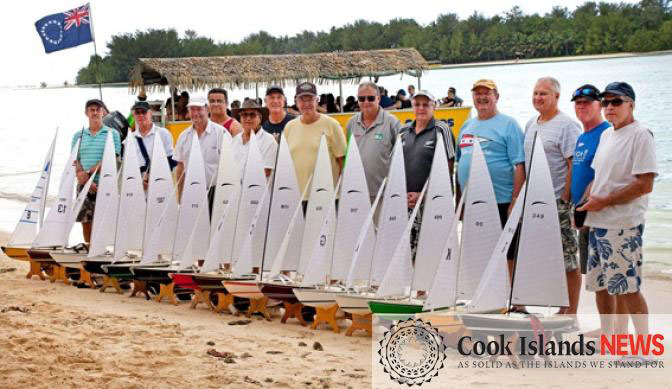 While the world has been distracted by the America’s Cup sailing extravaganza in Bermuda – another world yachting spectacle has been quietly getting underway on Rarotonga’s Muri Lagoon this week.
It’s the annual Electron ‘World’ Series – otherwise known as The Raro ‘Worlds’ – hosted by the Rarotonga Sailing Club.
The word ‘world’ is in quotation marks because the global status of the event is claimed by the competitors in a rather  tongue-in-cheek manner.
And if you are wondering why you haven’t seen Muri bristling with masts and flapping sails in preparation for the event, you might need to squint a bit and look a little lower.
The Raro ‘Worlds’ is for little yachts – scale model replicas, where the skippers sail them by remote control.
The Electron is a one-design, radio-controlled model yacht measuring just 900 centimetres in length, weighing just 4.9 kg – a concept designed and built by the late and revered Kiwi yacht designer Des Townson.
Electrons are owned as a hobby and sailed on lakes, ponds and marinas by many leading and retired sailors who appreciate the model boats real-life sailing qualities. Rumour has it that Mick Jagger owns one, as does Ringo Starr.
Eighteen of the ‘world’s’ best sailors – there  are those quotation marks again – have gathered this week at Muri to fight it out on the lagoon’s tranquil waters for the two big Fleet and Match Race titles being defended.
Eleven of the participants are Aucklanders from the Bucklands Beach, Orakei and Onepoto Yacht Clubs.
Two yachts are representing England and five are from the host Rarotonga club.
The locals are Tony Heays (defending his Match Race title), Peter Heays, Des Eggelton, Fram Kirkham and Kris Goodwin.
Bunny Nicholson from Onepoto, a large pond near Birkenhead, is defending his Fleet Racing title which he won last year  in the Orakei Basin.
Unlike the America’s Cup catamarans, Electron model yachts are of a standard one-hull design, raced straight out of the box, with no customising or fine tuning – the object being to make all boats equal on the water .
It’s the sailing skills of the helmsman that makes for racing excitement, with many of the competitors  retired sailors who have competed in major regattas and sailed real-sized ocean-going yachts around the world.
They won’t be going that far on Muri. Each race is over two legs of a 100 metre course, with races taking around eight to 10 minutes.
Craig Bennett, commodore of the Rarotonga Sailing Club welcomed the ‘international’ competitors at a function at The Rickshaw on Monday night.
“Welcome to the world championships of Electron yachting,” he said.
Someone called out that claim of ‘world’ championship was at best “unsanctioned”.
Bennett replied: “Don’t worry about it. We’re in the Cook Islands – we can bend the rules.”
Racing is to take place on Muri in front of the Sailing Club each day at around 2.00pm.
The regatta winds up on Friday with the  Ladies ‘World’ Championships – where the men’s wives get to have a go – and a final Ocean Race where the scale model replicas  will sail the length of the beach at Muri and back.
(Source: http://www.cookislandsnews.com/national/local/item/64923-muri-lagoon-scene-of-world-sailing-regatta)