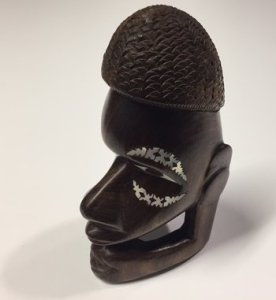 The Tokyo based Pacific Islands Centre’s Promotional Coordinator Reiko Takada visited the Solomon Islands and Nauru in April this year. Pacific Islands Centre (PIC) is an office of the Pacific Trade Invest (PTI) network.
Ms Takada met with exporters of local products such as coffee, Narinut (a nut harvested mainly in Melanesian nations), and Nguzu Nguzu (pronounced nuzu nuzu), which is a traditional signature sculpture representing the country.
The Nguzu Nguzu is one of the most striking pieces of craft that is well known nationally and a favourite among international tourists. The small figure head carving is a totem for the people of Western Province, its origin traces back to ancient days of warfare, which saw it donned on canoes (Tomoko) as a form of ancestral protection and a guardian. The Nguzu Nguzu has become a national icon of the Solomon Islands that is featured on the country’s $1 coin and used in special national celebrations.
In the Solomon Islands, she also held a business seminar for trade officials as well as private businesspeople in cooperation with the Solomon Islands Government’s Ministry of Commerce, Industries, Labour, and Immigration. At the seminar, she explained to participants about  Japanese consumer trends of recent years as well as the concept of ‘ethical’ production and consumption, which is rapidly gaining attention in Japan.
In Nauru, Ms Takada visited companies that make accessories from phosphorus ore, a main resource of the country. She also met officials from the Department of Foreign Affairs and Trade, Government Offices, to research Nauru’s latest trade development and to share thoughts about future collaboration with PIC.
For more information please email Yoko Yuki at yukiy@pic.or.jp