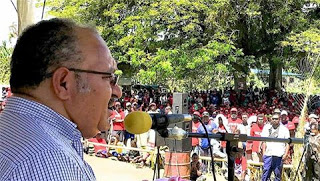 Papua New Guinea Tourism Promotion Authority (PNGTPA) has announced that preparations are well underway for the APEC 2018 Tourism Week to be held in Port Moresby on May 28 to June 2.

Chief executive officer Jerry Agus confirmed that the authority was gearing up to showcase the best of Papua New Guinea’s unique and diverse cultures and to engage with other 20 APEC member countries using digital technology to explore opportunities in the global market.

The week’s program will start with a “Women in Tourism Dialogue” themed “Women as Prime Movers of Sustainable and Inclusive Tourism in the Digital Age” which captures the APEC 2018 PNG theme of “Harnessing Inclusive Opportunities, Embracing the Digital Future”.

This will be followed by the 52 tourism working group meeting, the 10 APEC tourism ministers meeting, a ministerial gala dinner and a regional visit to Kavieng, New Ireland Province.

This campaign will engage with social media audiences, including the visiting delegates to share their experiences of APEC 2018 PNG by posting photos of themselves with PNGTPA’s social media corflute frames onto their Facebook, Instagram and Twitter pages with the hashtags: apecpng2018 and #visitpng to promote PNG.

PNG APEC ambassador Ivan Pomaleu said the PNG APEC secretariat was excited about what PNGTPA was planning towards the event.

Mr Pomaleu also commended PNGTPA for its support towards the APEC secretariat in it hosting of all major APEC 2018 meetings held thus far in Port Moresby.