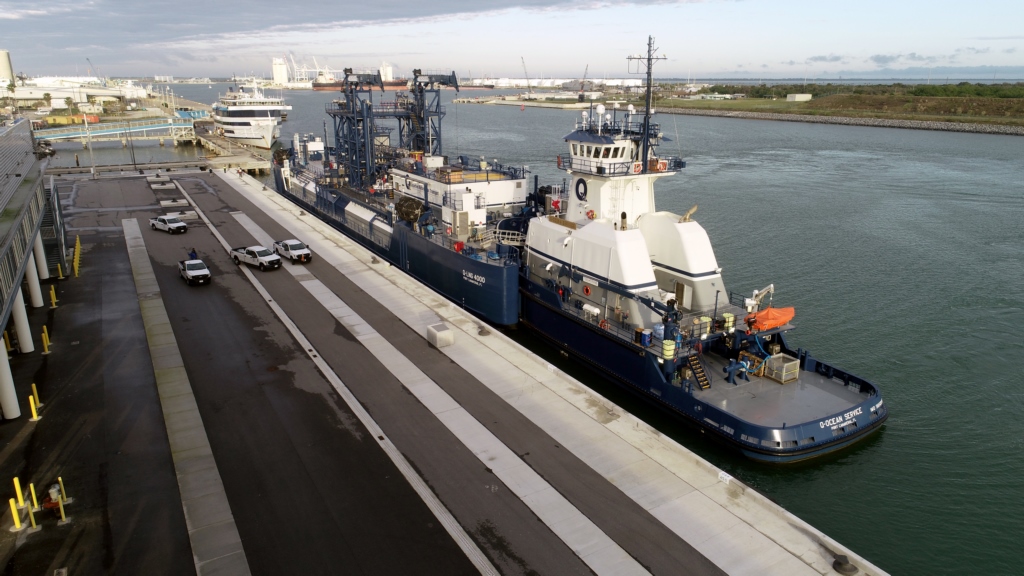 Port Canaveral marked a milestone in the safe, reliable transportation and delivery of liquefied natural gas (LNG) in North America as the Q-LNG 4000, a ship-to-ship articulated tug and bunker barge (ATB) arrived at America’s first LNG cruise port, according to a press release.

Nicknamed the “Q4K”, the purpose-built ATB has been designed, engineered, and internationally and U.S. certified to provide safe and reliable ship-to-ship transfers of LNG.

The Q4K will operate in Port Canaveral providing LNG fuel to cruise vessels, notably to Carnival Cruise Line’s LNG-powered Mardi Gras which will homeport at Port Canaveral beginning this year.

“This project has been four years from concept to reality and we are excited to welcome the Q-LNG 4000 to fuel the next generation of cruise ships,” stated Capt. John Murray, Port CEO. “We have been working closely with our cruise partners, all the federal and state regulatory agencies, and industry leaders to promote this industry initiative.”

The barge, constructed in cooperation with LNG fuel supplier Shell Trading Company and Q-LNG Transport, arrived at Port Canaveral recently for a sailing and berthing familiarization exercise. The vessel docked at Port Canaveral’s newly constructed Cruise Terminal 3, which was completed in June 2020 but not yet welcomed its first cruise passenger, with the global shutdown of the cruise industry due to the COVID pandemic.

“LNG is the fuel of the future, it’s clean, less expensive and made right here in the United States,” stated Canaveral Port Authority Commission Chairman RADM Wayne Justice (USCG-Ret). “We are proud to be part of making this safe secure move to the future in this region.”

The barge is 324-feet-long, and its attached tug is 128-feet-long. The U.S. owned and operated vessel was constructed at VT Halter Marine Inc. shipyards in Pascagoula, Mississippi and is crewed by U.S. mariners. It is the first Jones Act compliant ATB built in the U.S. that is specifically designed to conduct LNG cargo and bunker operations. When the Q4K is conducting its ship-to-ship waterside bunkering process of a cruise vessel like the Carnival Mardi Gras, it will take place during the ship’s passenger debarking and embarking processes, like conventional refueling operations, and last approximately six to eight hours.

“We are proud to deliver the Q-LNG 4000 to Port Canaveral,” said Chad Verret, President of Q-LNG Transport. “LNG is the marine fuel of the future, it’s domestically sourced and in abundant supply in the U.S. We look to supplying not only cruise ships but trading vessels in the future.”

The barge will load LNG from a fuel distribution facility on Elba Island, Ga., then return to Georgia to refuel after each LNG bunkering operation in Port Canaveral. Q4K has a carrying capacity of up to 4,000 cubic meters of LNG, the equivalent of one million gallons of fuel. The Q-LNG 4000 will carry enough supply of LNG to fuel two cruise ships, each for a seven-day itinerary.

For four years, the Canaveral Port Authority has been preparing for the onset of LNG fueled cruise vessels. The Port has been working closely with federal and state regulatory and oversight authorities and agencies, and investing in infrastructure and personnel training to ensure the safety and security of the Port and surrounding community.

The Q-LNG 4000 fueling operations will be supported while it’s in Port Canaveral by the Port’s newly-acquired fireboat, which arrived in January. The purpose-built Marine Firefighting Rescue Vessel (MFRV) will be operated by Canaveral Fire Rescue to provide enhanced fire protection and response capabilities to serve the expanding maritime and commercial space industry operations at the Port.