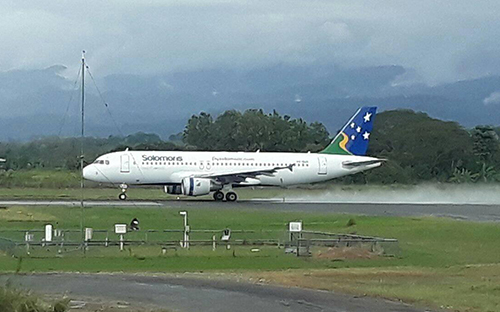 The Solomon Islands Chamber of Commerce & Industry (SICCI) congratulates Solomon Airlines for establishing its newest flight route to Kiribati, marking the start of a weekly flight plan between Honiara, Brisbane and Tarawa.
Solomon Airlines made its inaugural flight to Tarawa today. To mark the occasion, the flight carried a small delegation from Kiribati who arrived prior, Government officials from the tourism sector, private sector representatives and executives of the flag carrier.
SICCI Chair Jay Bartlett, who was among the travelling delegates, said the establishment of the Tarawa route is a historic milestone for Solomon Airlines and will have a diverse impact on both the private sector and the country’s tourism sector – serving as a gateway to Australia and Kiribati.
“The Chamber on behalf of the private sector congratulates the achievement of Solomon Airlines and looks forward to its ongoing schedule,” said Mr Bartlett.
The Brisbane-Honiara-Tarawa link was signed by Solomon Airlines and Air Kiribati in March this year.
The partnership is followed up from an Air Service Agreement (ASA) and a Memorandum of Understanding (MOU) signed between the Solomon Islands Government and the Republic of Kiribati in November 2016.
It is understood that under this ASA, Solomon Airlines and Air Kiribati, in collaboration with each country’s Civil Aviation Authorities, will promote the aviation sector, as well as initiatives stimulating both countries’ social and economic development.