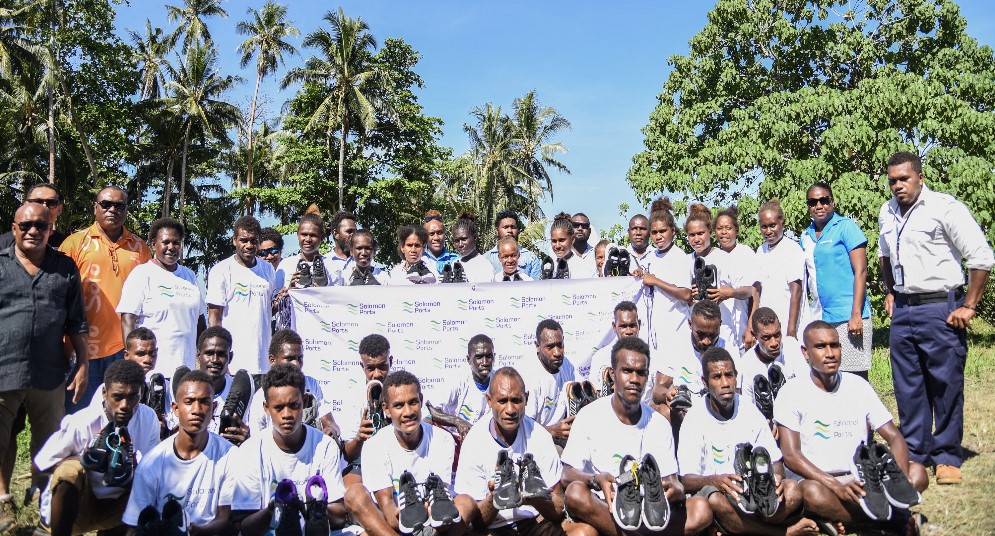 Honiara, Solomon Islands – Continuing a tradition that stretches back to 2009, Solomon Islands Ports Authority (SIPA) will once again give San Isidro Care Centre students the opportunity to take part in this year’s Fly Solomons Peace Marathon.

Already in pole position as the Gold Sponsor for the 23 October event, SIPA has very generously provided shirts, shorts, and shoes to the centre enabling 30 San Isidro students to compete along with more than 600 already registered runners.

Speaking at the official handing-over of the sports equipment to the students, SIPA’s web and media officer, Lowen Sei said his organisation was very happy to work with the centre, the event organisers and other stakeholders in ensuring the success of the marathon.

“It is our pleasure to be able to donate sporting wear to the students,” he said.

“On behalf of SIPA we wish you all success as you carry the message of peace throughout the event.”

Thanking SIPA for its generosity, its ongoing support and encouragement to the students, San Isidro Care Centre principal, Sister Maria Fe reminded her charges to enjoy their experience but be aware of the message behind the event.

“You run for fun but remember, you also run for peace,” she said.

In other developments, both SIPA and Solomon Airlines have further extended support for the event.

SIPA has announced it will sponsor all first prizes for both men and women runners competing in the 2km, 5km and 10km events with the winners receiving $500 sportswear vouchers.

Solomon Airlines, in addition to offering cash prizes and return domestic air tickets to all first-place winners, has generously offered to fly in two competitors from Malaita, four from Makira and four from Western Province enabling them to take part in the event.

Travel Solomons managing director and marathon committee member, Karen Foimua said she knew the provincial runners had been training hard for the event.

“We are expecting some very tough competition this year,” she said.

Ms Foimua advised that for those still wishing to compete, they can register at the Art Gallery Exhibition Building on Mendana Avenue until 22 October.

The Event
Scheduled to take place in Honiara on 23 October 2021, the Fly Solomons Peace Marathon is a joint initiative between the Ministry of Culture & Tourism, Tourism Solomons, Travel Solomons, and Solomon Airlines.

The Fly Solomons Peace Marathon will comprise four events – 2km, 5km, 10km races, and a 21.1km Half-Marathon – with a host of attractive sponsor-donated prizes to be awarded across a variety of categories.

The Fly Solomons Peace Marathon forms part of the ongoing ‘Iumi Tugeda’ campaign launched in September 2020 as part of a five-point plan intended to rekindle and sustain the Solomon Islands tourism sector’s fortunes as it looked to adapt to the COVID-19 environment.

While primarily positioned as a social event to bring the people of Honiara and the Provinces together in a fun activity in these uncertain COVID-19 pandemic-dominated times, the event is also intended to remind people of the ongoing Solomon Airlines-driven ‘Iumi Tugeda Holiday Program’.

Launched earlier this year, the initiative has played an active role in encouraging Solomon Islanders to holiday in their own backyard in support of struggling tourism operators affected by ongoing international border closures.

As importantly, the event is also seen as being key in drawing the community’s attention to the celebrations being planned around an event which will once again see the world’s spotlight shine upon the Solomon Islands – the 80th Anniversary of the Battle of Guadalcanal which falls in August 2022.