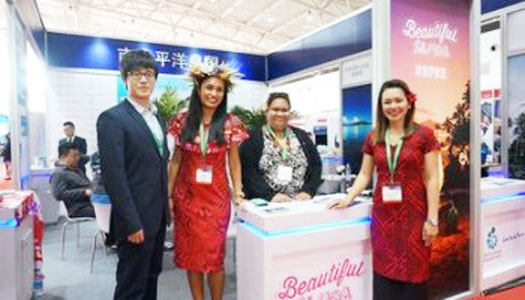 The South Pacific Tourism Organisation will be part of the largest annual professional travel show in Asia, the China International Travel Mart (CITM), to be held in Kunming China from the 17th – 19th of November, 2017.
Organized by China National Tourism Administration (CNTA), the CITM draws the attention of people in the tourism industry worldwide and will be attended by members of the international travel and tourism industry from all sectors; airlines, travel agents, hotels and the general public.
Other participants from the region include three National Tourism Organisations (NTO) namely Papua New Guinea Tourism Promotion Authority, Samoa Tourism Authority and New Caledonia Tourism with tourism private sector participants from PNG and New Caledonia.
CNTA are working in collaboration with SPTO through the provision of 4 complimentary booths for the NTO’s and private sector partners.
SPTO CEO Chris Cocker said, “China is an important market for the Pacific because it is the fastest growing market globally. SPTO and the region is fortunate to have the continued support of China whose partnership is critical to our activities in China”.
Mr. Cocker added, “The last five years have shown a strong growth in Chinese numbers with an average growth of 32.8%. Annually, arrivals from China rose dramatically from 46,639 in 2012 to 153,119 arrivals in 2015.”
“In 2016, arrivals from China to the Pacific dropped slightly by 5.9% to 144,045. The two top Pacific destinations for the China market, Palau and Fiji accounted for the majority of the arrivals with 45.1% and 24% share respectively in 2016.”
“Given this trend, we are expecting numbers for 2017 to further increase and we hope to continue to attract Chinese visitors and niche segments in sustainable numbers going forward”.
Recent statistics show that the total number of visitor’s arrivals from China to the South Pacific represented 8% of all arrivals into the region for the January – June 2017 period. The total number of visitors from China for this period was 65,496. Out of these arrivals into the region, 6,215 (9.9%) visited New Caledonia, Papua New Guinea and Samoa.
SPTO will be conducting promotion and awareness through media partner Travel Link Marketing website to drive increased traffic to the South Pacific Islands booth from both travel trade and media across China. The event has been supported as well by the Pacific Islands Trade & Invest office in Beijing, a key partner of the SPTO in driving tourism promotion and development initiatives in this emerging market.
SPTO’s main objectives for their participation is: