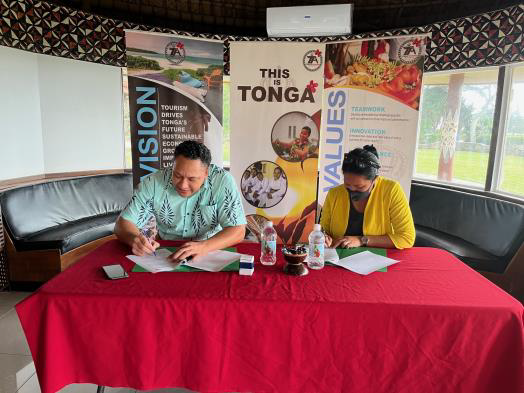 The Tonga Tourism Authority (TTA) once again signed a Memorandum of Agreement (MOU) with the Tonga Netball Association (TNA) at the TTA office in Nuku’alofa.

The TNA was represented by the CEO, Mrs. Salote Sisifa who met with TTA General Manager, Mr. Viliami Takau to formalize the marketing and promotion of Tonga through the national Tongan netball team.

The TNA is famed for its clean sweep at the Pacific AusSports Netball Series in Sydney back in March after defeating Fiji in the grand final. ‘The TTA understands that in the heart of many Tongans is sport whether they play the sport or not but our national Sports teams are our nation’s pride. Without question, for the men, there’s rugby union and rugby league, and for the ladies its netball. I’d like to thank Salote and Team Tonga for their brilliant display of sportsmanship and for carrying Tonga’s name to new levels in netball. We are excited for this partnership as it is our hope that our Tongan ‘mafana’ or pride continues to shine through our people as we continue to recover and rebuild a more resilient Tourism sector in Tonga.

For more information and or questions, please contact Ms. Simata-e-la’a Palu at the Tonga Tourism Authority on simatapalu@gmail.com or +676 7744669.