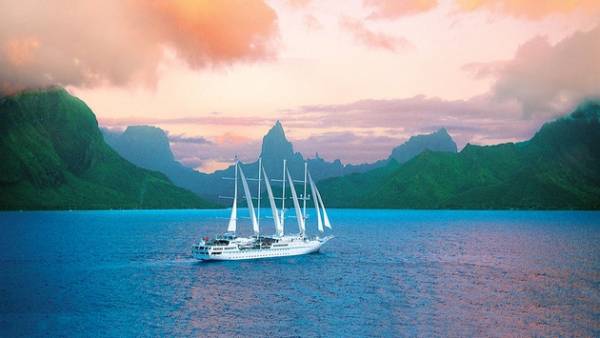 Tahiti Is Upping Its Cruising And Air Travel Game

Just about anyone who has ever seen a photo of Tahiti and its crystal blue waters are surely, instantly enchanted.
So when I had a chance to sit down at Seatrade Cruise Global with Paul Sloan, CEO of Tahiti Tourisme, and Kristin Carlson Kemper, Managing Director of Tahiti Tourisme, I too was hooked and ready to instantly set sail.
(In fact, I will be on Windstar Cruises’ Wind Spirit in November, and I can’t wait to share and review the experience here when I do.)
In the meantime, they brought me up to speed on what is happening regionally to support cruise travel. Paul Gauguin Cruises and Aranui are regular visitors besides Windstar; The likes of Oceania Cruises, Silversea Cruises, Regent Seven Seas Cruises and Crystal Cruises make calls periodically as well.
The existing piers can service three vessels between 300 and 350 meters simultaneously, but there is not yet a terminal. However, one is about to break ground this year and is set to open in 2020.
Kemper is, “hoping with this as well a couple of other projects we’ll highlight that we get another ship or vessel of some size home-ported in the near future,” (i.e. ideally year-round).
“One really neat thing about this project is it’s going to have a clear walk bridge over the main boulevard to get into the city of Papeete,” Kemper added. The bridge will be a 20-foot-wide promenade with no steps but only convenient slopes to cross.
“It is a lovely bustling city, but there’s also stunning interior lush valleys, waterfalls. It’s also when you go a little ways out the home of our big wave Teahupo’o where the Billabong annual surf co is every August for advanced surfers. … There definitely is more to see than just going to the market … “
Kemper expounded, “A lot of people are familiar with Tahiti, Moorea, Bora Bora, overwater bungalow[s], but… our new campaign is called ‘Embraced by Mana’… It’s really to talk about the culture and the people. We’ve found a few years ago when people arrived in Papeete, we surveyed them and said, ‘what are the three words that you think of when you think of Tahiti?’ They would say, ‘beauty, beach, paradise,’ and then upon leaving, we asked the same thing, and while sure they’d say, ‘beauty, paradise,’ they said, ‘friendliness.’”
The international airport will also see $12 million in renovations. Plus, Air Tahiti Nui, which currently flies an Airbus fleet, will change over to Boeing 787 Dreamliners beginning in December 2018. From then, the airline will introduce another new one each quarter through the end of the following year.
As for the cruise facilities, Sloan explains that the piers aren’t changing, but they will no longer be merely tented to support visitors:
“It will create basically an actual [terminal], and it’s going to have two levels, so people can disembark and everything else can logistically be done down below. You’ll actually arrive at the upper deck, and this will be all restaurants and stuff. It’s [a] very beautiful panoramic because from here you look over at the island of Moorea, which is [a] postcard view. So, even if you’re just sitting at the front terrace having a lunch, it’s going to be really nice.”
He added, “That, combined with the airport renovations, which will be putting in airbridges, it means when people arrive flying in on new Dreamliners, arriving at a new state-of-the-art terminal and going to a great cruise terminal, their whole circuit will be [streamlined]. So, French Polynesia is really stepping up their game.”
In fact, the Tahiti airport is only ten minutes or so away from the cruise piers depending on traffic.
Sloan said, “From the harbor you can see the end of the runway.”
Just as we were beginning to close our interview, Sloan mentioned one other fascinating piece of movie trivia: “Did you see Moana, the Disney film? So, Disney came down. They were very involved with visiting the various Polynesian destinations, and they came [to] research.
“But when they were launching it, they came down. We had Disney from Hollywood, but also we worked a lot with Disney France, the president of [the] Disney studio. And the islands in the thing, Motunui and all of that, was actually based on Moorea, but the caves where she finds the boats there is based on the grottos of Tahiti, the island of Tahiti.
“So, as Kristin said, getting away from the port is awesome. It’s a big island. It’s a big town, and there’s just tons to see. And they’ve got a really cool PowerPoint that Disney does. They show like the caves that they visited on Tahiti, and then they show the caves that she visits. They show the mountains of Moorea, and then they show the island.
“And we had voice talent [come] for a trip. We had a bunch of media and stuff who had only seen the cartoon version, and when we took them and they’re seeing, they’re going, ‘this is like what I saw in the cartoon film.’ So, that’s kind of a little connection. Most Polynesians are pretty happy about it because it’s a cartoon, but it’s a really good depiction of it. But it’s a little bit of [an] interesting, fun thing that it’s two of the easiest islands to get to.”