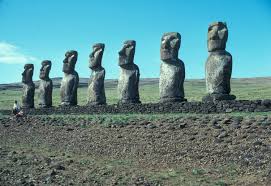 The Origin Of The Word ‘Taboo’

It was sometime in early March when a passenger with Covid-19 landed at the world’s most remote commercial airport, disembarked into Easter Island’s sticky air and subsequently infected members of the small volcanic outcrop’s indigenous Rapa Nui community.

This 164-sq-km speck in the middle of the vast Pacific Ocean is a Chilean territory famed for its 887 monolithic human figures, known as moai. But with just three ventilators to serve a population of 7,750, Mayor Pedro Edmunds Paoa made the tough decision to cancel all incoming flights beginning 16 March, effectively terminating the 2020 tourism season. Cases on the island grew to a total of just five thereafter, and by the end of April, the virus had been completely eradicated – while mainland Chile suffered from one of the globe’s most explosive outbreaks.

“Tapu is a sacred order to protect our health, to protect our life and to protect our elders and their ancient wisdom,” he explained. “It’s a form of discipline rooted in Polynesian culture that has to do with restrictions, but also respect.”

The mayor says that when he shut Easter Island off from the outside world, residents were divided between those who trusted him and others who knew it would ruin the tourism-based economy. “I had to come up with a way to unite us because the only enemy was the virus and the only way to confront that was to bring up the ancient concept of tapu.”

Tapu is essentially a self-care principle based on respect for the norms of nature, with spiritual restrictions and shared prohibitions at its core. Things that are tapu are to be left alone and may not be approached, interfered with or, in some cases, even discussed out loud. After successfully using it as a form of quarantine in the early days of the pandemic by restricting the movement of islanders to prohibit social contact, the government has now revived another ancient principle, umanga, or reciprocal labour between neighbours, to give islanders a shared sense of purpose.

Thanks to both tapu and umanga, Easter Island has not only successfully warded off the coronavirus; it’s revived past practices in order to plot a more sustainable future.

The origin of the word “taboo”

Tapu is practiced in various forms across Polynesia, from New Zealand to Hawaii, and is believed to be the origin of the English word “taboo”, with British explorer James Cook first noting the concept on a visit to Tonga in 1777. While tapu is a divine mandate controlling a society’s access to certain people, places or things (with potentially dire consequences for those who transgressed in historical times), taboo is similarly used in English to describe practices that are either forbidden or restricted by social or religious customs.

On Easter Island, the respect locals have for their archaeological sites is a noticeable example of tapu. However, other forms of tapu – including prohibitions on fishing during spawning seasons – have been lost over the last 50 years as the island adapted to meet the needs of international tourists.

“Little by little, the community has been losing these ancient cultural ideas as they submitted themselves to modernisation,” said Edmunds Paoa. “To me, this materialistic agenda is the worst thing that’s happened to us.”

But perhaps the tide is now beginning to turn after months of extreme isolation due to a lack of visitors – at least, that’s what Carlos Edmunds Paoa, president of the island’s Council of Elders, believes.

“These concepts we have, including tapu, are very important for daily life on the island, particularly in this moment, because we have returned to the old system,” he said. “Of course, that’s not entirely possible, but we are in this process of rediscovery because it’s very important to be able to get by like we did in the past before we had the big boats, the planes and the phone connections to the outside world.”

To live in a place like Easter Island, he explained, is like “being on a small boat, with a small crew, and you have to learn how to survive with all the elements you have.”

Problem is, Easter Island has been so heavily dependent on mainland Chile for food, and its 100,000-odd annual tourists for income, that it hasn’t needed to function in survival mode. In that sense, the pandemic was a blessing in disguise, helping to turbocharge a programme that aims to make the island self-sustainable and waste-free by 2030 using umanga.

Reactivating the island with umanga

Umanga describes the sense of collaboration islanders feel when they help each other out, without expecting anything in return, in order to sustain the community as a whole. If you have more than others, you share it. If you know information that others don’t know, you tell them. If you’re healthy enough to build something, you offer your hand. All of this is umanga.

In its modern form, umanga has been revived as an employment scheme called Pro Empleo Rapa Nui, which has put 700 islanders back to work, remunerating them with a modest sum.

“Formerly on the island there were very few resources, so the families – no matter who, how or if they would get paid for it – always helped, and that’s what we’re all doing now,” explained Nunú Fernández Paoa, who heads up the Pro Empleo programme. “We are all working together to beautify the island, to help people out and, in the end, to give a sense of umanga.”

Pro Empleo has seven main objectives, she said, including insuring food security, empowering cultural exchange and beautifying the island. Thanks to the programme, there is now news in the local Rapa Nui language, dedicated family vegetable gardens, intricate new street signage, enhanced recycling initiatives and regular craft fairs to promote internal exchange. Plus, out-of-work tour guides have trained the younger generation about the importance of the island’s archaeological sites, while dive instructors have scoured the ocean floor to remove two tonnes of rubbish.

“We looked at the pandemic as an opportunity to push forward with our plans to develop our island more sustainably,” Fernández Paoa said. “Plus, it has given workers a sense of meaning in what they are doing.”

Phase one of the programme, which lasted from May to August, was an investment of 1.3bn pesos (about $1.6m), while phase two, which runs from September to December will cost another 1.2bn pesos (about $1.5m). The government has diverted a large percentage of the island’s annual budget to the cause.

“Now our eyes are open”

Edmunds Paoa says umanga is the perfect example of how coronavirus has helped Easter Island to realise it needed an entirely new paradigm – one based less on growing tourism and more on reverting to ancestral ways of self-sustainability that have been lost over time.

“For me, as the leader of the island for almost 30 years, I’m actually thankful for the pandemic situation, because it has enabled this plan of sustainability and respect for nature,” he explained. “Up until March 2020, we had a mask over our eyes and we couldn’t see.”

What the pandemic did, he explained, was change the position of the mask from the eyes to the mouth.

“It shut our mouths, because we kept eating and consuming and searching for money and building and destroying the nature and our fragile culture, without seeing the jeopardy that we were putting ourselves in,” he said. “Now, our eyes are open, and we are more keen to promote sustainability in words, actions and plans than we ever were before.”