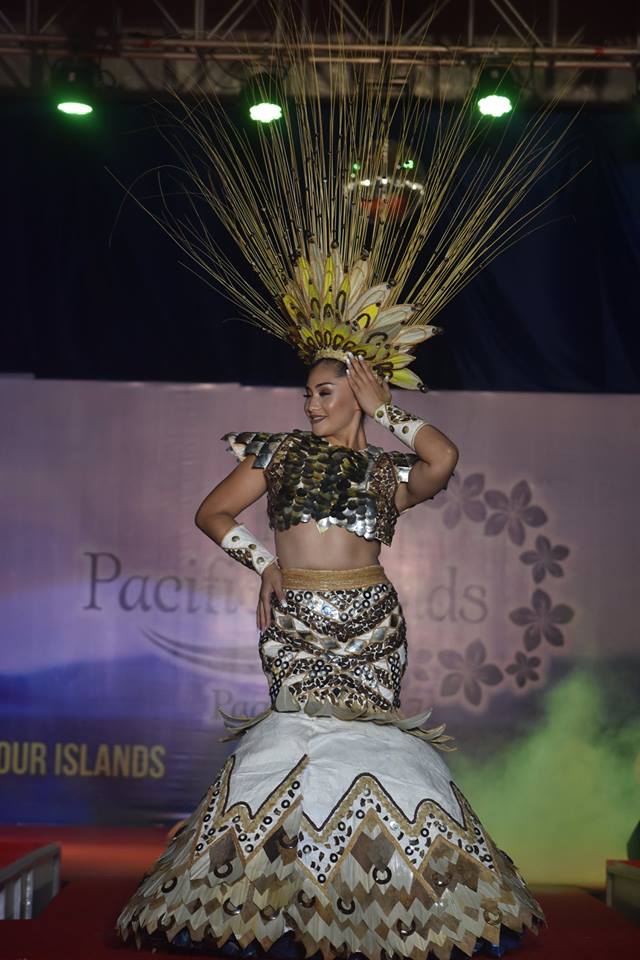 The clever choreographing of the nine beautiful Contestants’ performances by artists and artisans, the best Pacific fashion houses, chaperones, mothers and Kinfolk of the Pacific Island nations, was evident in the traditionally inspired attire category of the 2017 Miss Pacific Islands Pageant held in Nadi, Fiji.

TRADITIONALLY INSPIRED ATTIRE: Contestants of the 2017 Miss Pacific Islands pageant in their traditionally inspired attire on the same evening of their stage interviews as one of the publicly judged events at prince Charles park in Nadi, Fiji

On the theme, Climate Action to Sustain our Islands, the nine contestants showcased some of the amazing artwork by the respective fashion designers and artisans from the participating countries.
The initial attire was that of contestant number one, Miss Nauru, who showcased the use of traditional plants from her country.

Miss Papua New Guinea wore a gown inspired by reflections and contradictions. Her outer wear was made from woven mats painted with white swirling designs representing the waves. Her inner dress was inspired by land and the sea, as land being our inheritance – represented by the brown and natural colours of the dress using raw mountain tapa cloths from the highlands of Papua New Guinea and finely woven pandanus mats from their coast. Hard and strong as our land and yet so easily washed away by our rising seas.

Miss Rapa Nui’s traditional attire is inspired by what young Rapa-Nui women used to wear to formal events. Her dress displayed traditional motifs which have been hand-block printed using the traditional tapa printing colors white, red, brown and black. The same colors in assorted feathers are used in the head piece, neckpiece and the dress. The center shell feature on the headpiece consist of shells common in Rapa-Nui. Mother of black Pearl Shells are heavily featured in the neckpiece, headpiece and earrings.

Miss Samoa’s striking cloak is a tribute to the beautiful Pacific Ocean that surrounds and sustains our islands. The cloak signifies the many shades and hues of our ocean which mirrors the rainbow colours of our Blue Pacific skies. The decorative stained glass fragments that line her cloak symbolise the majestic waves that cross the ocean linking our islands, and the richness of our marine ecosystems. Her regal attire is reflected in her queenly collar and puffed sleeves made from the Lau ua tapa cloth, with sleeves carved in Samoa’s traditional patterns and decorated with shells and sinnet. The skirt is made from woven pandanus and the front illustrates the sacred traditional tattoo, unique to the Samoan women, symbolising courage and stamina.

Miss Cook Island’s attire begins from her headpiece where she carries with her the pride and dignity of her people. Flowing down from the centre are white pearl shells which reflects the significance of faith on this isolated island. From her neck the intricate layout of the sacred vines of the Po-u-e signifies fishing season on Pukapuka and their conservation practices is evident during this period. This full skirt which is made from soft tapa, became the preferred attire for any special occasion such as weddings and ceremonies something they adopted from their time in Peru and the Spanish influence.

Miss Tonga’s traditionally inspired attire was a two piece in which the dress was all handmade (knotted) from few hundreds of meters of braided coconut fibre or kafa, decorated with golden pearl shells to form Tonga’s national flower the Heilala on the bottom of my dress sprinkled with golden pueki shells found in the beaches of Tonga. The skirt was made out of white tapa or fetaaki decorated with kafa and shells. Her headpiece were frangipani flowers made from coconut fibre and shells depicting the campaign by the Pacific climate change warriors ‘have your sei’. Her necklace was Golden Cowries tied to a rope made out of the young coconut leaves a simple of appreciation to nature and its blessings.

Miss Fiji’s attire was inspired by the coconut. Miss Fiji says the coconuts will not only quench your thirst but will build you shelter, furniture and even meet your health and clothing needs. The “Davui” represents the “Call” to and from our leaders, to draw attention to the issue of our century – climate change.

Miss American Samoa in her traditional attire wowed the crowd with its interwoven layers of fine arts and designs reflecting a strong and fierce woman. The contestants were also asked on the night for their stage interviews on the topics of culture, tourism, health, technology, environment, gender equality, politics, and climate change actions to sustain our Islands.