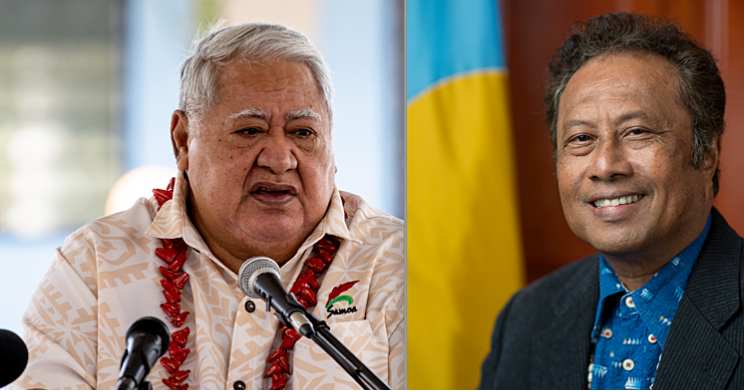 Prime Minister Tuilaepa Dr. Sailele Malielegaoi believes it is Micronesia’s turn to be represented as the next Secretary-General of the Pacific Island Forum, but his comments come couched in caution.

He said the all three senior leadership positions of the Forum should be spread among the sub-regions, and so the vacant seats must be decided accordingly.

With a Micronesian already in the deputy seat, perhaps another in the Secretary-General’s chair is not fair.

“This is something that is just not appropriate,” Tuilaepa said.

During the weekend, the President of Palau, Tommy Remengesau Jr. wrote to the Prime Minister asking him vote for Micronesia’s pick for the next Pacific Island Forum Secretary General.

His letter comes amid political turmoil between the Pacific regions, with the Micronesian sub-region’s leadership threatening leave the Forum if their Secretary General pick isn’t elected in accordance with a “gentleman’s agreement” to cycle representatives through each sub-region in the Pacific

Leaders of the Pacific will meet next month to decide their next Secretary General, in a virtual leader’s summit from the 16 to 18 December.

“In their submission, [they said] the candidates from Melanesia and Polynesia keep taking the seat […]. They said it was their time.

“Neither of these three chairs should have the impression that they run the show of this Forum, which is why I am saying it is not appropriate for the Secretary General and Deputy Secretary General to be both Micronesians.”

The three chairs include the Chair position, currently held by Tuvaluan Kausea Natano. Dr Filimon Manoni, the Marshall Islands’ former Attorney General, was elected Deputy Secretary-General in May this year.

Despite this, President Remengesau and his counterparts in the other Micronesian nations insist it is their turn.

“Mr. Prime Minister, you know I have long seen you as an elder brother,” President Remengesau writes, in his letter dated Saturday 21 November.

“You know Pacific politics better than anyone, and don’t need me to explain the importance of the Gentleman’s Agreement.

“But the message of that agreement is more important than ever. There are too many forces that would divide our Pacific, and the world needs to see that P.I.F. represents Melanesia, Micronesia, and Polynesia equally.”

In his afternoon interview with T.V.3. on Wednesday, Prime Minister Tuilaepa said Samoa believes it is the Micronesian leaders’ position is fair but does not sympathise entirely.

He said he has written his own letter back to President Remengesau, highlighting the issues with the vote.

“In our view, yes, your standpoint is correct,” he began.

“All candidates vying for the seat are smart and talented. And we do not know who is most fitting for the job unless they individually give us descriptive explanations as to why [they] are fit for the job and why they are determined to become the Secretary-General, and we will then consider.”

He said as leaders of the Pacific’s nations, they need someone who is most fitting for the job to give them advice on areas they need help with.

As for Palau and the other nations’ threat to leave the Forum, Tuilaepa said it made him laugh.

“If he wants to leave, that is of his prerogative, but in things like this, one should never be quick to anger.”

Just one Micronesian has ever been leader of the Forum: the first president of Kiribati, Sir Ieremia Tabai, who was appointed in 1992.

The unwritten rule of the position is that it should rotate between the regions, with Micronesia arguing it is their turn and threatening to leave the Forum if the “gentleman’s agreement” is not honoured.

It is the first time there is competition for the role, rather than a consensus among the members on their top pick.

In his letter, President Remengesau asks Tuilaepa to support Mr. Zackios to become the next Secretary General, saying Palau will “not surrender the issue of sub-regional rotation.

“Palau has stood by Samoa bilaterally, and will continue to do so regardless of this issue,’ he said.

“To reject the Gentlemen’s Agreement would be to reject the Micronesian sub-region, and that is precisely the wrong message for the Pacific to send in 2020.

“Mutual respect is the core of the PIF, and it has been my honor to work with you, and with other great Pacific leaders, through that organization.

“With your support, it will remain a forum for Pacific leaders from all sub-regions, and a vehicle of strong Pacific unity.”

Meanwhile, Radio New Zealand reports Chair of the Forum Kausea Natano has recommended the candidates undergo an elimination process, and has urged the countries to work together to end the tensions over the next Secretary General.

He says he believes the selection process should be done in a Pacific way.

“The Pacific Way is sorting out the differences and trying to maintain solidarity and agree in a peaceful way to come up with a candidate who will maintain the solidarity of Pacific island countries,” he said.

President Remengesau said while all the candidates for the role are “top quality,” the appointment Is about more than individual credentials.

“Palau sees this appointment as a decision of critical importance,” he wrote.

“P.I.F. member states have put forward top-quality candidates, and we should be proud of the leadership depth in this region.

“However, this appointment is not merely an issue of individual credentials: it is also an issue of Pacific unity.”

The five Micronesian nations (Palau, Kiribati, the Marshall Islands, Nauru and the Federated States of Micronesia) have signed a communique outlining their reasons for backing Mr. Zackios and why they feel forced to leave the forum if he is not elected.

They have said they see no benefit to staying in the Forum if the agreement to rotate the leadership is not honoured.

After the Micronesian Presidents’ Summit in October, Nauru President Lionel Aingimea said the leaders will stand firm on this issue.

“This is a matter now of Micronesian solidarity and Micronesian pride,” he told reporters in Palau after the summit.