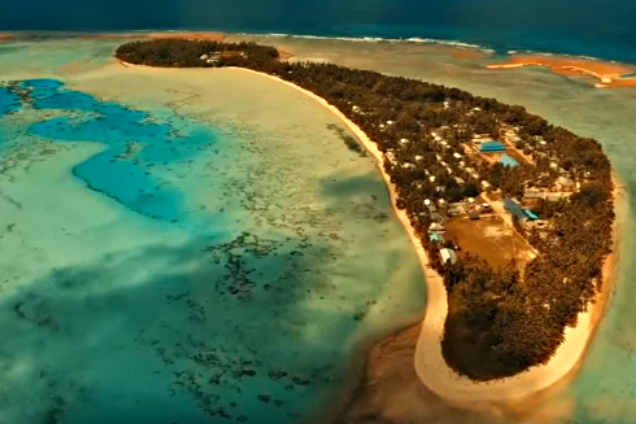 The Prime Minister of Tuvalu along with the United Nations Development Programme (UNDP) have today officially launched the Tuvalu Coastal Adaptation Project (TCAP) marking the start of an ambitious, large-scale push to protect the Pacific island nation from climate change.
The Tuvalu Coastal Adaptation Project, set to run for seven years, is financed with US$36 million from the Green Climate Fund and $2.9 million from the Government of Tuvalu.
“Some time ago a little girl on the island of Nanumea asked me: ‘Prime Minister what can you do to save me? How can you ensure I can continue living on my island?’ That question struck at the bottom of my heart. It has become my mission and must be the mission that every Tuvaluan must focus on.” said Prime Minister Enele Sopoaga, at the launch event. “This project is the pride of Tuvalu. Its implementation is based on strong partnership with island leaders and communities, and with our partner UNDP we will paddle together to build resilience.”
The project focuses on construction works to defend infrastructure including roads, schools, hospitals and government buildings. Crucially, the project will also build the capacity of Tuvalu’s government and future young professionals so they can better respond to and protect against climate impacts.
The project lifts up the role of Tuvaluans in its design, implementation and ownership, and was developed in close consultation with members of the community including men, women, youth and the elderly. Communities will contribute to assessing the environmental and social impacts of the project, as well as specific engineering designs. Local community members will be trained in the operations and maintenance of the coastal protection investments. The island leaders of Funafuti, Nanumaga and Nanumea – the three islands on which the project will be implemented – joined the launch.
Tuvalu’s vulnerability is acute: the country has an average elevation of only 1.83 meters. While rising sea levels are encroaching on homes, crops, roads and eroding fragile coastlines, the islands’ coastlines are also being battered by increasingly intense tropical storms, bringing with them heavy rainfall, strong winds and waves.
“This project is about trying to build the resilience and combatting the impact of manmade problems that a country like Tuvalu faces. It’s not just about building coastal structures for climate adaptation but it’s also about helping the economy and helping people to live better lives” said UN Resident Coordinator and UNDP Resident Representative, Osnat Lubrani. “We are here today at the launch of the project – the first GCF project to commence implementation in the Pacific and as such, there will also be best practices and lessons learnt from the implementation of a GCF project.”
“The Green Climate Fund was established in part to help address the pressing adaptation needs of developing countries at the frontlines of climate change,” said Executive Director of the Green Climate Fund’s Secretariat, Howard Bamsey. “Building the resilience of small island developing states like Tuvalu is an investment priority.”
The project received its first tranche of funding from the Green Climate Fund in July of this year. Implementation will begin immediately.
For more information, please visit http://www.adaptation-undp.org/projects/tuvalu-coastal-adaptation-projec…. For updates on the project, follow #TCAPGCF and @UNDP_Pacific and @UNDPClimate Contact information
Silafaga Lalua Tauetia, Media Advisor, Office of the Prime Minister, Government of Tuvalu; email: silafong@hotmail.com; tel: +688 20815 / +688 7004553
Winifereti Nainoca, Deputy Team Leader, Resilience & Sustainable Development, UNDP Pacific Office winifereti.nainoca@undp.org
Yusuke Taishi, Regional Technical Advisor, Climate Change Adaptation, Bangkok Regional Hubyusuke.taishi@undp.org