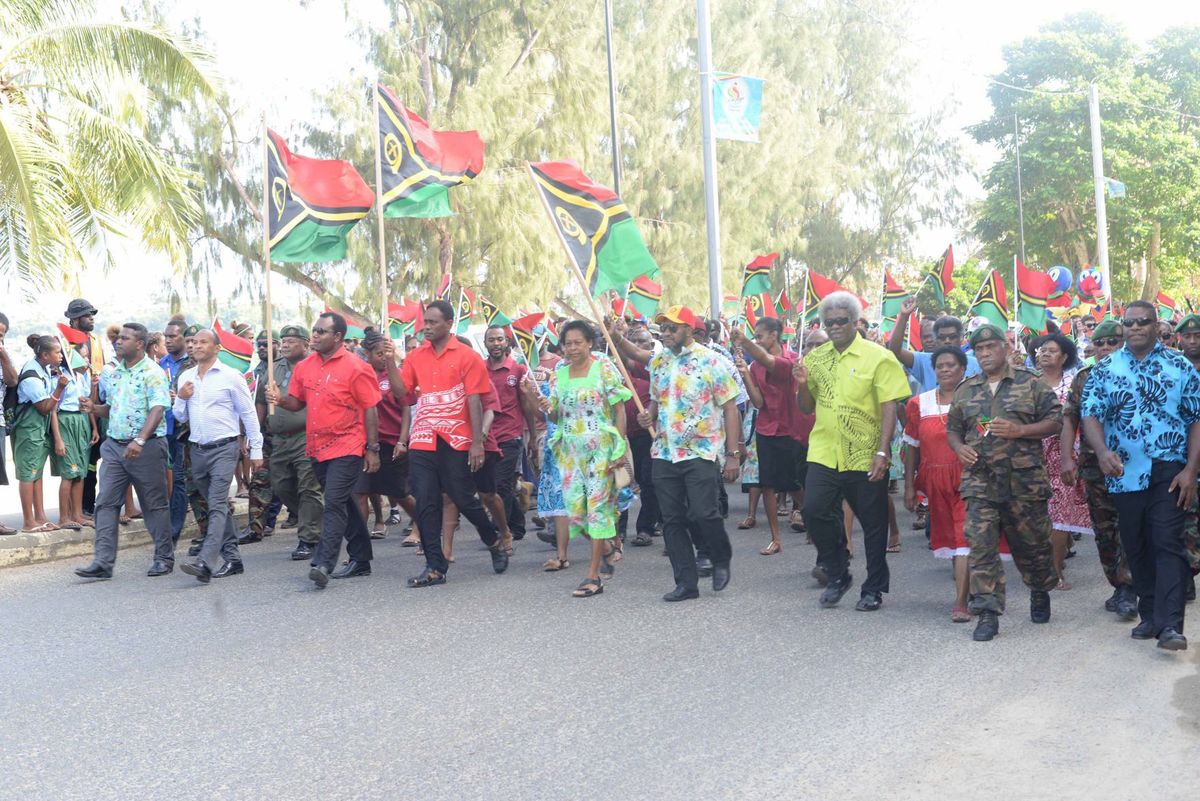 Minister of Internal Affairs, Alfred Maoh, has officially declared the opening of the 2017 Independence Anniversary celebration, as Vanuatu celebrates its 37 years of sovereignty.
The declaration was made following a colorful parade led by the Vanuatu Mobile Force (VMF) through the streets of Port Vila into the Independence Garden yesterday morning.
The theme for this year’s celebrations is, “Strengthening the National security, accessibility to education, focus on local employment and creation of a health insurance plan”.

The theme reflects on the challenges and issues encountered by the people of Vanuatu.
In his speech, Chairman of the Independence Celebration Committee, Mayor Ulrich Sumptoh said if these key areas are addressed, it would help Vanuatu achieve its healthy and wealthy nation goal.
Mayor Sumptoh acknowledged the positive turn out from the public, school children, government departments and private sector at the opening ceremony and thanked the committed Independence Committee for their hard work which was reflected in the successful outcome of the victory.
As Vanuatu is approaching its Independence Day in a few days, the Port Vila Mayor said the victory march came as a reminder for the struggle for the forefathers, those who are here with us today, and those who have passed on, for it is through their struggles that Vanuatu is a democratic nation today.
Sumtoh appeals to the people of Vanuatu to revive the spirit of unity and oneness shared by our forefathers towards gaining of our independence. “We could use the same unity approach to help grow Vanuatu into the future.
The people of Vanuatu should feel responsible citizens, he added.
“Contribute towards this country and move the nation forward.”

Supporting the words of Mayor Sumtoh, Minister Alfred Maoh also called on everyone to be responsible in whatever they do.

He reiterated on the value of respect, a virtue that the society is lacking in this era.
It is 37 years on, and it is about time the people of Vanuatu must act as mature citizens and think positive always.
“Law and order must be prevailed at all times. You don’t have to pretend and put out an act only when an enforcement officer is present, but act otherwise when no officer is around. This is common sense. It should come naturally. The responsibility is entirely in your hands. You will take responsibility of your own actions.
“Celebrate with pride. Celebrate safe. Celebrate responsibly to allow harmony and peace to prevail.”
The Chairman of Independence Celebration, Mayor Sumptoh and Minister Maoh then wished the People of Vanuatu a Happy and safe Independence Celebrations 2017.
The first flag raising ceremony on the 30th of July 1980 saw the lowering of French and British flags and the raising of the Vanuatu Flag. ?? Happy 37th Independence Day ?? to all Ni-Vanuatu at home and abroad. Long God Yumi Stanap. #DiscoverVanuatu