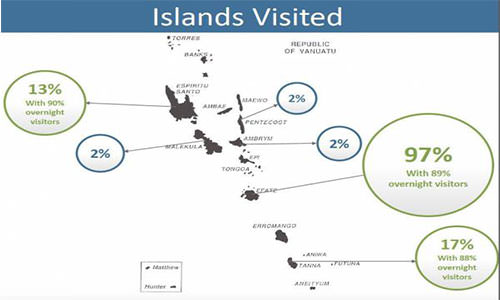 The number of visitors and spending continues to rebound as the country records Vt1.4 billion per month as direct economic impact from air arrivals between April and July.
That is the finding of the Vanuatu International Visitor Survey, jointly carried out by the Auckland University of Technology, International Finance Corporation, Vanuatu Tourism Office and the New Zealand Tourism Research Institute, for April to September 2016.
The amount is calculated based on a spending of Vt175,112 per visitor per trip or Vt19,025 per day.
In April 2016 the number of arrivals was around 5,000 but by July 2016 it took a hike to 10,864 according to the Vanuatu National Statistic Office. This did not include data from August to September, which were not yet available at the time of survey.
According to the survey, 80% of the visitors are from Australia and New Zealand. The survey also shows that 58% are first time visitors and it is the long haul visitors who are most likely to visit the outer Islands.
In terms of decision making, 54% of the visitors plan their travel themselves. Between the three months 70% of the visitors come for holiday. Business ranks the second most popular reason for visitors to Vanuatu and most of those traveling to Vanuatu from business purposes are from other Pacific Island Countries.
Most visitors choose Vanuatu for its quiet and relaxing atmosphere.
While 89% of the visitors are satisfied to very satisfied with their visit, areas of improvement identified includes public services, infrastructure, value for money, food quality and price.

The average length of stay for visitors is 9.2 nights and the most visited Island is Efate, followed by Tanna, and Santo.
Tourism attractions influence visitors’ decision.
Meanwhile tourism is a vital resource for the Vanuatu economy. Visitor expenditure is spread across a number of economic sectors — not just accommodation, tours restaurants. The survey reveals that visitors yield remains lower than during pre-cyclone period but is beginning to show signs of bouncing back.
While friends/family/word of mouth and previous visits are the most important factors in making the decision to travel to Vanuatu the internet is the number one tool used to actually plan the journey.