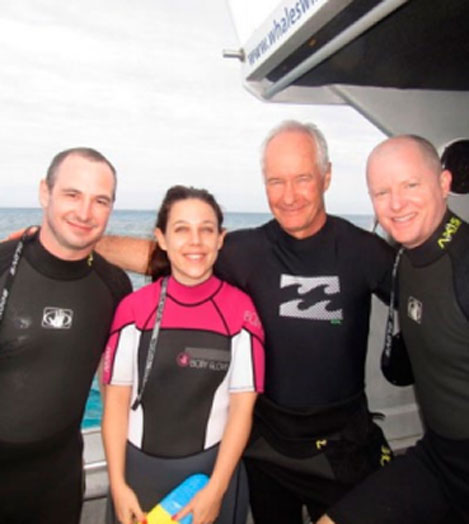 Whale Of A Time – Right At Tongatapu

The biggest reason for clients to go to Tonga – swimming with the whales. One big misconception – that they will have to travel out to Ha’apai or Vava’u to do it.
A group of wholesale agents in Tonga last week took a 30-minute trip out from Nukualofa’s port and were in amongst whales in no time. The swimming opportunities were limited on that particular day because of choppy conditions (fleeting glance really) but the whale watching was still superb.
The group got close to a female and calf, then a group of three and two playful large adults – one that raised its head close to the boat and had a look around. Later in the afternoon there was some spectacular breaching Steve Shearer, of Scenic Hotels, says one big reason for the famil was to show agents how much could be done on Tongatapu, without the expense of flying on to outer islands. Whale watching (along with culture and natural land sites) is one of the ‘easy to dos’ from the main island, he says.
The group was hosted on and in the water by Whaleswim, Fish and Dive Tours, which has been operating for five years. Founder Jeff Laurie runs a total of five boats – three dedicated to whale swimming and watching. He is totally committed to the welfare of both guest and whales – four clients in the ocean at any time, guided by a local and with strict instruction on how close they can get (which is actually easily close enough).
Guests are also given a short snorkelling experience on an attractive reef near Malinoa Island to make sure they are comfortable in the water.
The whales in Tonga are humpbacks, the fourth largest species, and they run to 40 tonnes, 18 metres in length and live to 80 to 100 years (the oldest recorded was 120).
Learning more about these magnificent creatures and the climb out of the endangered list (for now anyway) is one of the attractions of the swim.
The day experience costs NZ$345, including morning tea, lunch, return transfers, and all gear. It is 20% commissionable to overseas wholesalers. of the swim.
The day experience costs NZ$345, including morning tea, lunch, return transfers, and all gear. It is 20% commissionable to overseas wholesalers
Fafa close for Kiwi holiday market
Fafa Island Resort was opened in Tonga some 30 years ago and is still one of the most popular accommodation providers in the Kingdom.

Situated 40 minutes by motor yacht and 15 minutes by speed boat from Nukualofa, the island has maintained its ‘back to nature’ style and the owners have resisted any temptation to increase the inventory from its original 13 farés.
New Zealand and Australian wholesalers on a famil to Tonga late last week spent an afternoon at the resort, some taking an opportunity to walk around and through the island, as well as having a swim and a snorkel.
Resort manager David Frot says the market is mainly honeymooners and couples celebrating anniversaries, but there are also families and even solo travellers looking for an escape.
For Pacific with a difference recommend Tonga, say agents
The developing Pacific tourism destination of Tonga is a good sell for agents who have clients seeking alternatives to more frequently visited islands, say wholesale agents who have
just returned from a famil there.
‘When agents ring and say that clients want something different, that’s when I would ask if they have thought of Tonga,’ says Nicole Chitty, of House of Travel product.

Chitty says not only is the destination so much easier to sell now that she has been there, but she would also return. ‘I would do the whale experience again, probably more than once. It is so close to New Zealand and such an awesome experience.’
The wholesale group was hosted specifically by Scenic Hotels and flew Air New Zealand, but the effort was really a ‘pan-Tonga’ one. The agents split up to stay at small neighbouring local properties – Vakaloa and Heilala Hideaway Lodge –
on the last night and visited White Sands, Sea View Lodge and Waterfront Lodge (for lunch) before catching the flight home.
On previous nights they had stayed at Tanoa Dateline Hotel and Scenic Hotel Tonga. Other highlights (along with the
whales) were a visit to Fafa Island Resort and a couple of tailor-made excursions with Tui’s Tiki Tours.
Camille Descours, ATS Pacific AOT New Zealand, says Tonga seems to be an easy location to work with and she was
impressed by the cultural aspects and historical attractions. ‘Ancient Tonga was a positive experience and the people were
very informative and friendly.’